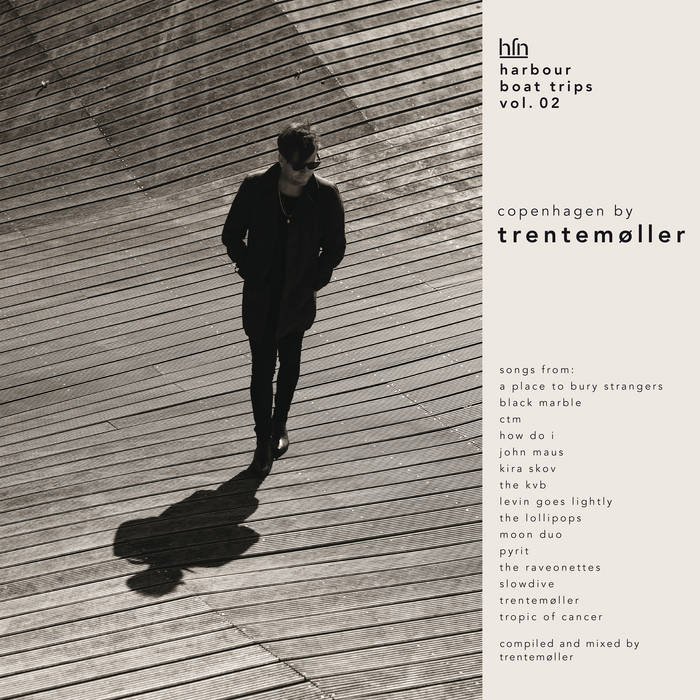 Anders Trentemøller’s career is a travel-heavy one, with his touring schedule taking him pretty much all over the world.
But it’s his home port that’s inspired his latest project, the sprawling, stunning compilation mix ‘Harbour Boat Trips Vol. 02: Copenhagen’. Clocking in at just over an hour long, the compilation sees Trentemøller curate and craft sixteen songs into a heavy, hazy mix that ranges from shoegaze to electronica, featuring both familiar and celebrated artists like A Place to Bury Strangers (with a new Trentemøller remix) and Slowdive to more obscure finds, as well as Trentemøller’s own tracks and remixes, most notably a brand new Trentemøller cover of Neil Young’s classic ’Transformer Man’.

The mix sees him pick up a thread he left off earlier in his career. In 2009 he put together ‘Harbour Boat Trips - 01: Copenhagen’, a compilation mix comprised of his favourite music, both Danish and international, from across four decades, loosely inspired by the motion and movement of Copenhagen’s busy harbour. Closing in on a decade later, we’re getting the second edition, with ‘Harbour Boat Trips – 02’ arriving this November.

“Sometimes, it’s nice to take a break from my own stuff and present some of the music that I like and music that inspires me”, says Trentemøller.

The diversity of his musical knowledge and taste is reflected in the variety of places and times the tracks are sourced from, from old Danish cult classics to some of the best new artists to surface in recent years like Paris’ Pyrit and Posh Isolation’s CTM. What perhaps unites the songs on the mix is their sense of heaviness, of artistic depth. There’s nothing throwaway or frivolous here, a mix stretching from industrial to shoegaze instead hitting the listener in the hard places. Trentemøller’s mixing highlights the qualities the songs share, their darkness but also their strange, cold beauty and ability to captivate.
Despite the songs being pulled from very different places, they share a certain spirit here they form a coherent artistic unit for an hour-long musical journey.

And according to Anders, that’s the point of a project like this, to not just to collect a bunch of great songs, but to mix them in such a way that the compilation develops its own distinct artistic character, its own separate story and identity:

“I like it when a mix tells a story, and it’s not just a compilation of different tracks. If the tracks together take you on some kind of journey, then it’s interesting for me. That’s also what I have been trying to do with this HBT release. It was very important to me that it’s not just another compilation of songs but a bunch of songs that means something to me, carefully mixed together to one whole.

I think a good mix is not limited to just one style, I always try to mix music that I like without thinking of what style it is. Instead it’s the mood and the atmosphere that make all these different songs blend together. It’s the glue.” says Trentemøller.

Like previous releases of the danish musician and producer Harbour Boat Trips Vol. 02 connects with the mood of a certain season of the year.

“I think this mix has a certain autumn vibe to it, it’s quite dreamy, melancholic but also noisy and violent in certain places. I didn’t want this mix to be a ‘coffee table mix’. It can work as background music maybe, but I think you get the best out of it with your headphones on and letting yourself let go in the music, in the moods of the mix.”

About the selection of songs Trentemøller says:
“They’re songs that have followed me for years, but also songs I discovered only recently. What I like about doing a mix like this, is that I can introduce the listeners to some songs they maybe haven’t heard before. A track like ’Naked When You Come’ is a Danish song from the 60s by The Lollipops, a quite corny band. But they wrote this amazing song that is so unique in terms of melody and production. The intro or the core groove of it, it could easily be the foundation for a modern hip-hop tune.
Another example is a Danish band from the early 90s called How Do I, who made an incredible cover of the ABBA song ‘Knowing Me, Knowing You’. Their version makes you feel the song and the lyrics much stronger through the way they approached it. It’s stripped down, and the changeover between the verses and choruses gives me goosebumps. Suddenly you listen to the lyrics much more carefully, and it feels like the music somehow really fits the words in a perfect way in this cover version.”

The lead single for the compilation is brand new Trentemøller release, a cover of Neil Young’s ‘Transformer Man’, a song that wasn’t an obvious choice for Anders at all. He says:
“Although I’m a huge Neil Young fan, I actually didn’t know about this song until Marie Fisker (a frequent colaborator (editor’s note)) played it to me when we sat down and thought about some songs that would be fun to cover for the mix. I wasn’t a fan of the song and its sound in the first place, but the melody, especially the hookline, somehow caught me. The song with its super corny vocoder and disco-pop sound is quite far away from what I normally listen to and so it wasn’t an obvious choice and instead I took it as a challenge to see in which direction we could take the song. I thought it could be interesting to get rid of all that disco/vocoder stuff and focus on the song itself and suddenly it shined in new splendor.” It’s the cover’s colder, starker, more affecting sound that puts it in spiritual sync with the compilation. With Marie Fisker on vocals, it keeps the original’s sense of alienation and anomie while bringing in into Trentemøller’s stylistic space, music that’s monochromatically beautiful and gripping.